The Schwertner family &Cie was founded in 1923 by the Sudeten Germans Bruno Reichel, Josef Schwertner and Heinrich Wundrak as an ingraving institute. They were first based in Georgigasse 22 and then further branches followed in Kernstockgasse and Georgigasse 30.

In 1931 another house in Georgigasse 28 was purchased and the company was recorded in the commercial register as a trading company. The production program initially included all types of badges (plastic and enameled), plaques, awards of honor, steel engravings and embossed signs.

Already at that time, badges, plaques, packaging and articles of daily use were produced here according to patterns and drawings. 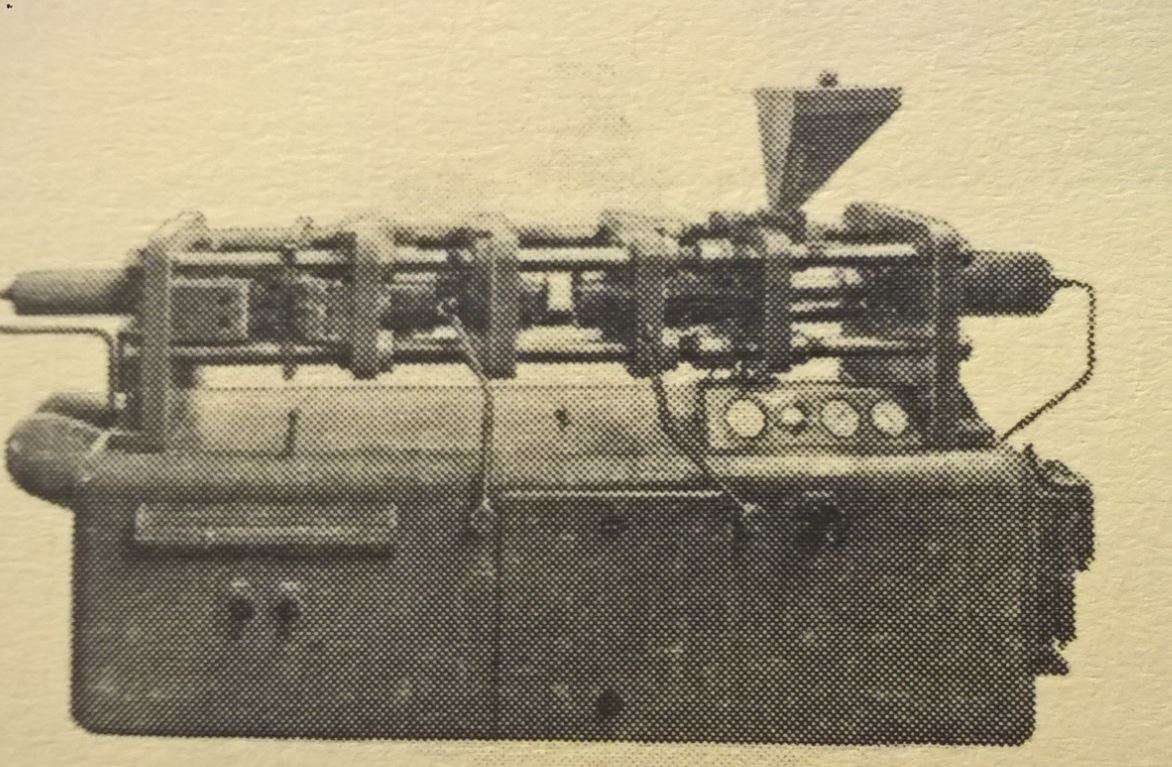 During the Second World War the company went through a difficult period, and was managed by at least twice by a public administrator. The company however recovered and the post war shareholders expanded the business under very difficult conditions. Soon the company was supplying goods to customers from all over Austria.

In 1968 Schwertner founders handed the company on to the second generation. Under the management of Mr Hans Reichel, Mrs Gertraud Waldherr and Mr Werfried  Wundrak. The company continued to grow and soon there were 80 employees.

In the late 70`s the company was converted into a limited partnership. After the death of Mr Hans Reichel, the shares were passed over by his son Walter Reichel.

In 1986 Gerda Schmidt took over the shares from her father Werfried Wundrak.

Due to the pressure of growing imports from cheaper countries in the market, processes and operations were optimized by the owners to such that the company with 45 employees successfully expanded its market leadership. 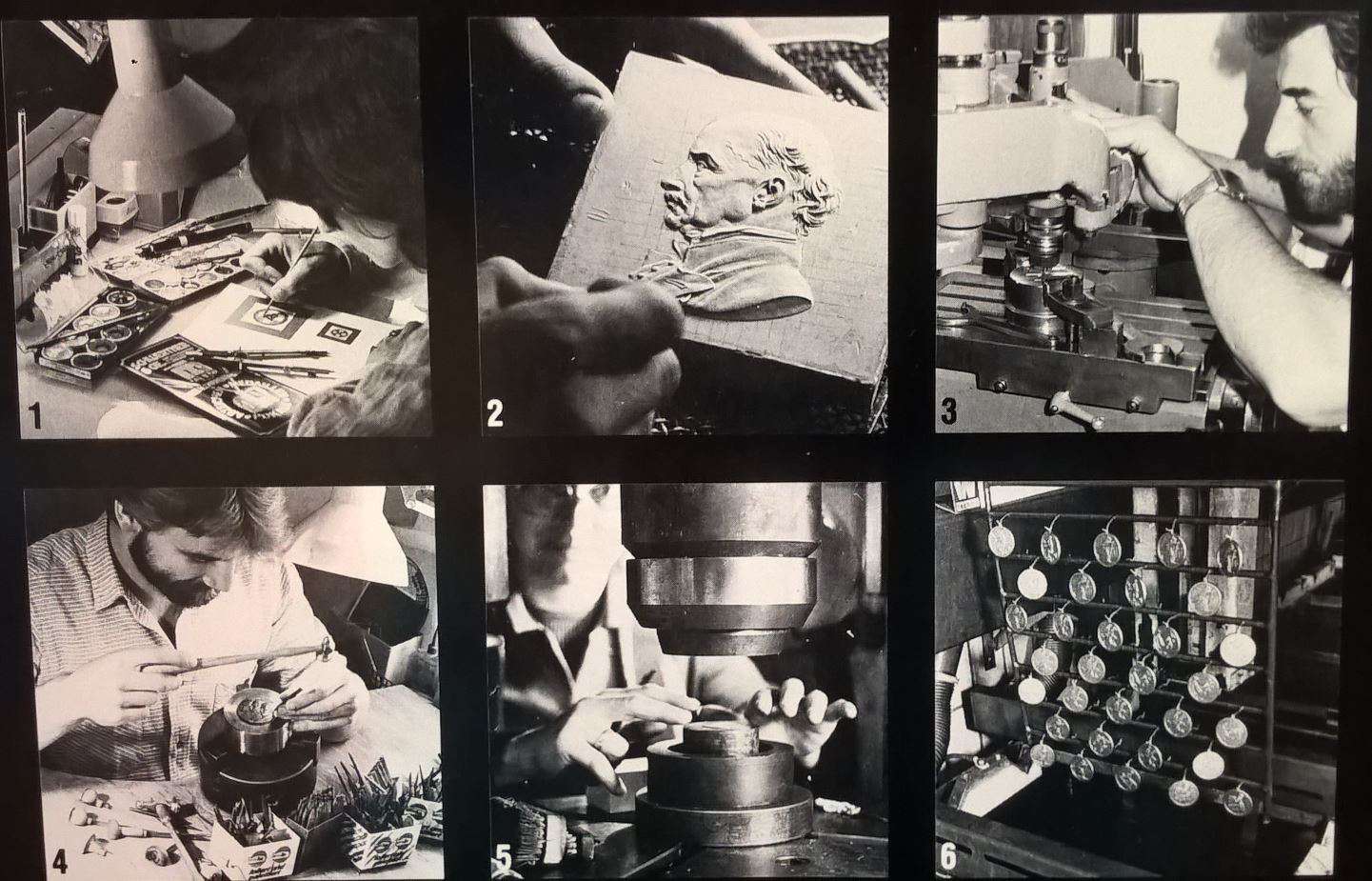 Gerda Schmidt, whose heart belonged to Holland, decided to leave the company and sold half of her shares to Walter Reichel and Christian Waldherr. 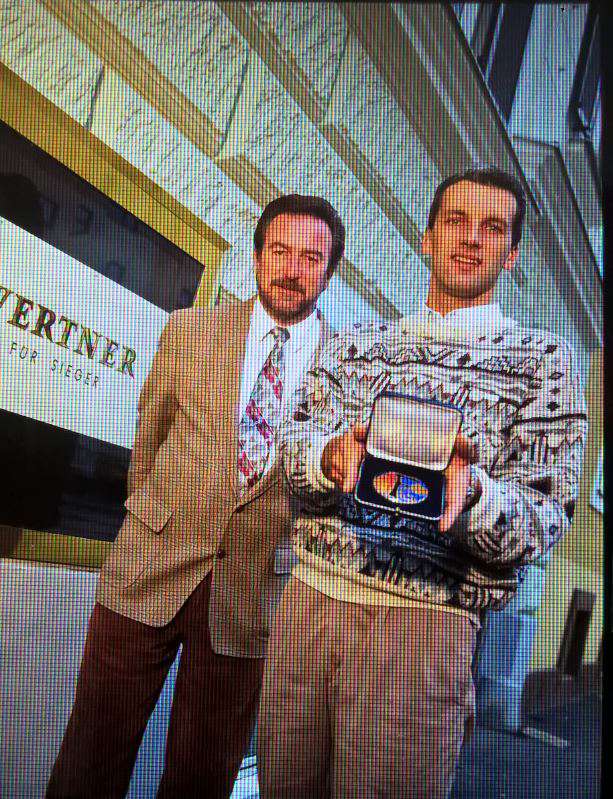 Walter Reichel passed his shares onto his son Werner.

Walter Reichel passed his shares onto his son Werner.

Thanks to the enormous commitment, the company now works without any outside capital and employs around 30 people. A  proven traditional company in Graz.

The company is awarded the Styrian coat of arms for its outstanding services to the Styrian`s economy. 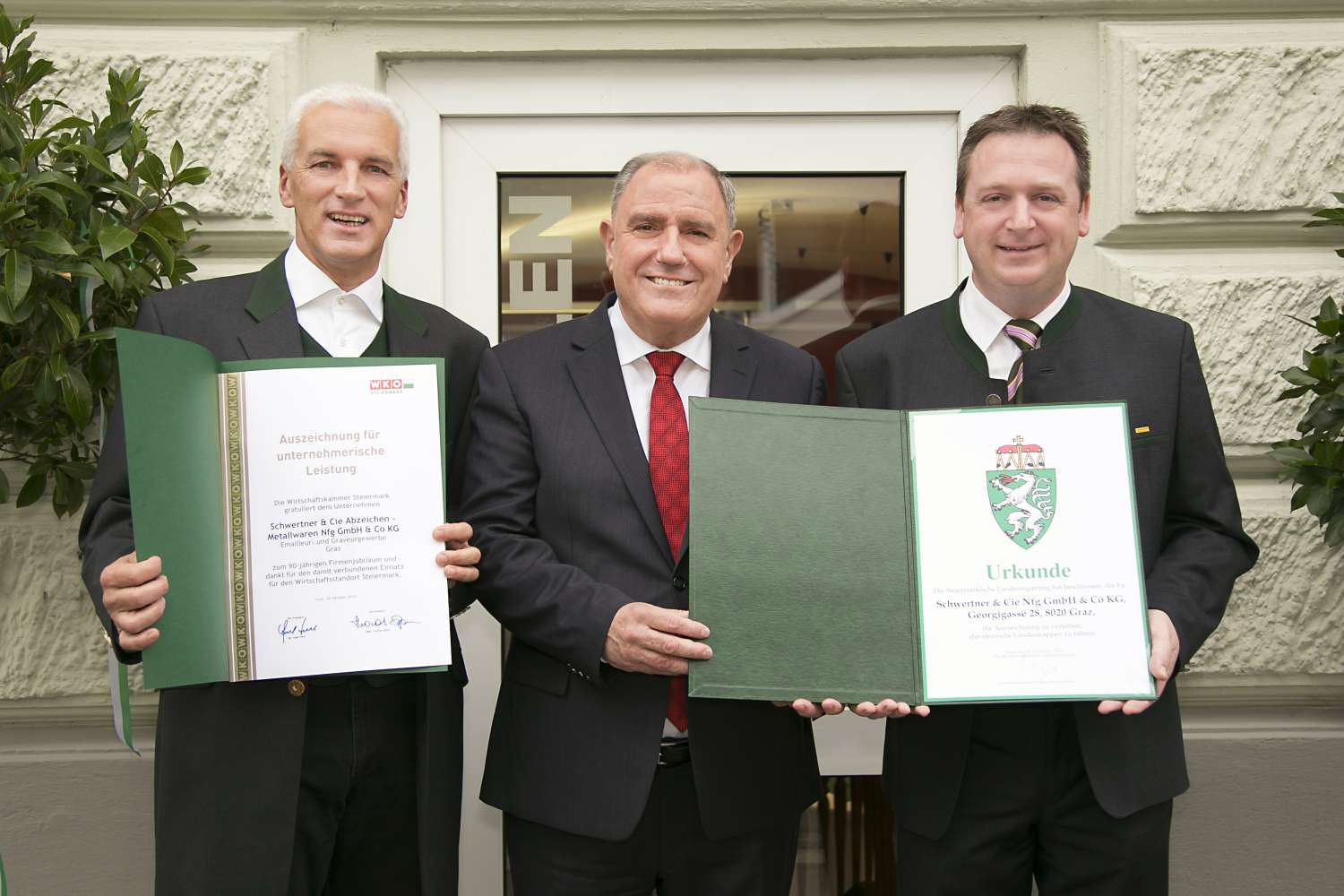 The plastics division is honoured by the Styrian chamber of commerce for it`s 50th anniversary. 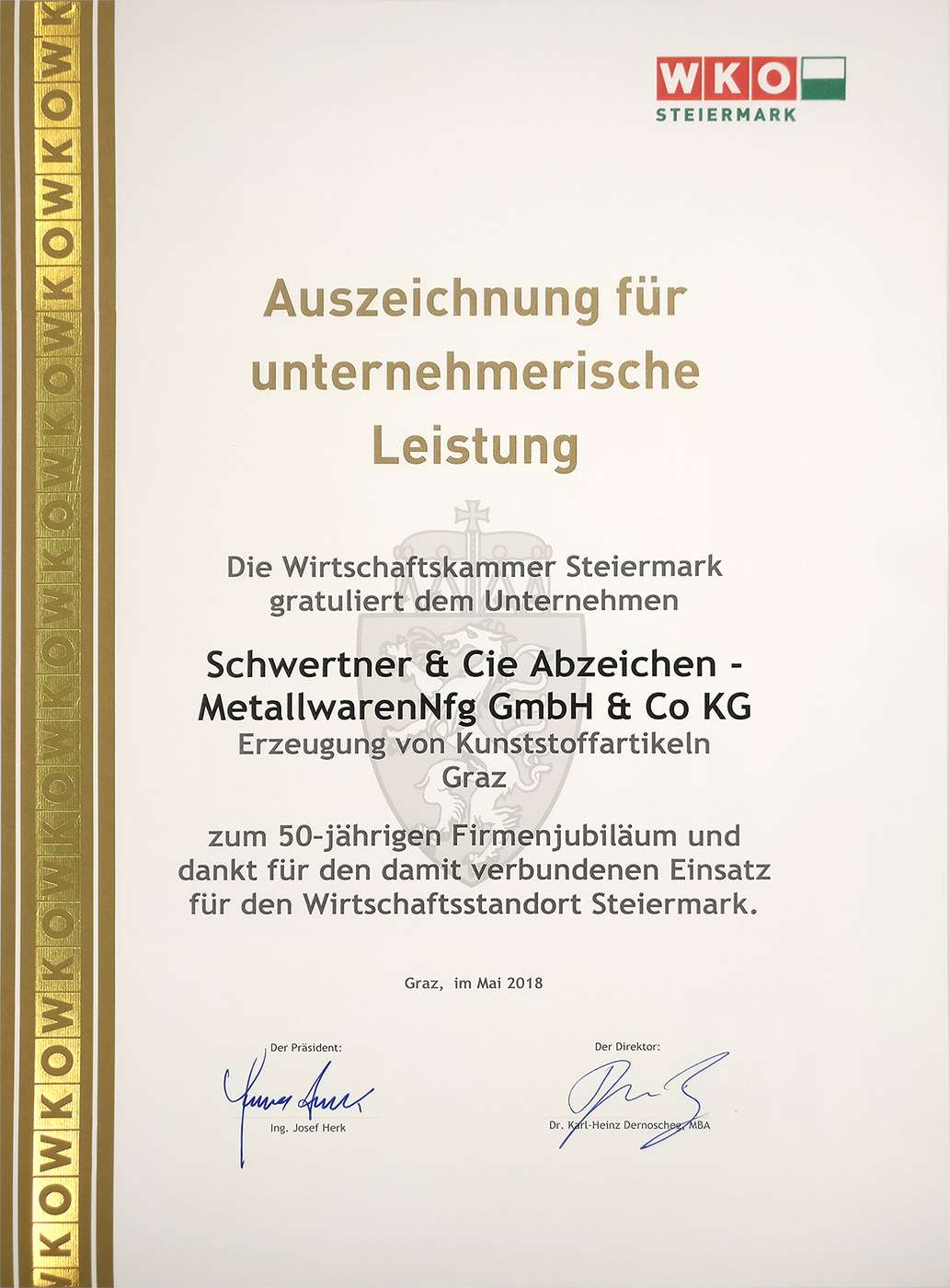 The Schwertner company was founded 95 years ago and is being honoured by the Styrian chamber of commerce for this anniversary. 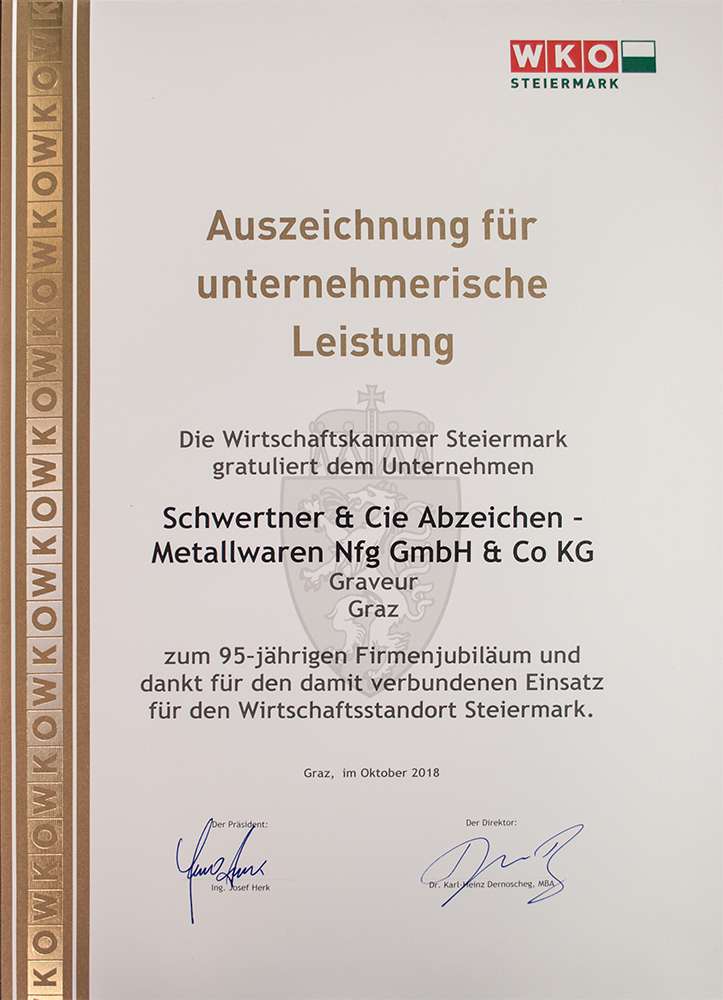 The product was added to your cart.

continue view cart
Cookie settings
If you select the “Accept all cookies” button, you are agreeing to the use of all cookies, which includes those of third-party providers as well as our own. Cookies that have been set by third-party providers may be processed in the USA. We wish to point out to you that an appropriate level of data protection may not exist in the USA at a given point in time, and that it cannot be completely precluded at any time that the US authorities will view your data. You have the option, with the item “Save my selection”, to decide for yourself which cookies you accept. You may of course revoke your agreement and change your settings at any time by clicking on our “Cookie settings” item.
Read more …

You can prevent the storing of cookies in your browser. Once you have set cookies, you can delete them at any time. You can find out how this works in the help function of your browser. You can find an explanation for the browsers Firefox, Microsoft Internet Explorer and Google Chrome here: http://www.meine-cookies.org/cookies_verwalten/index.html.